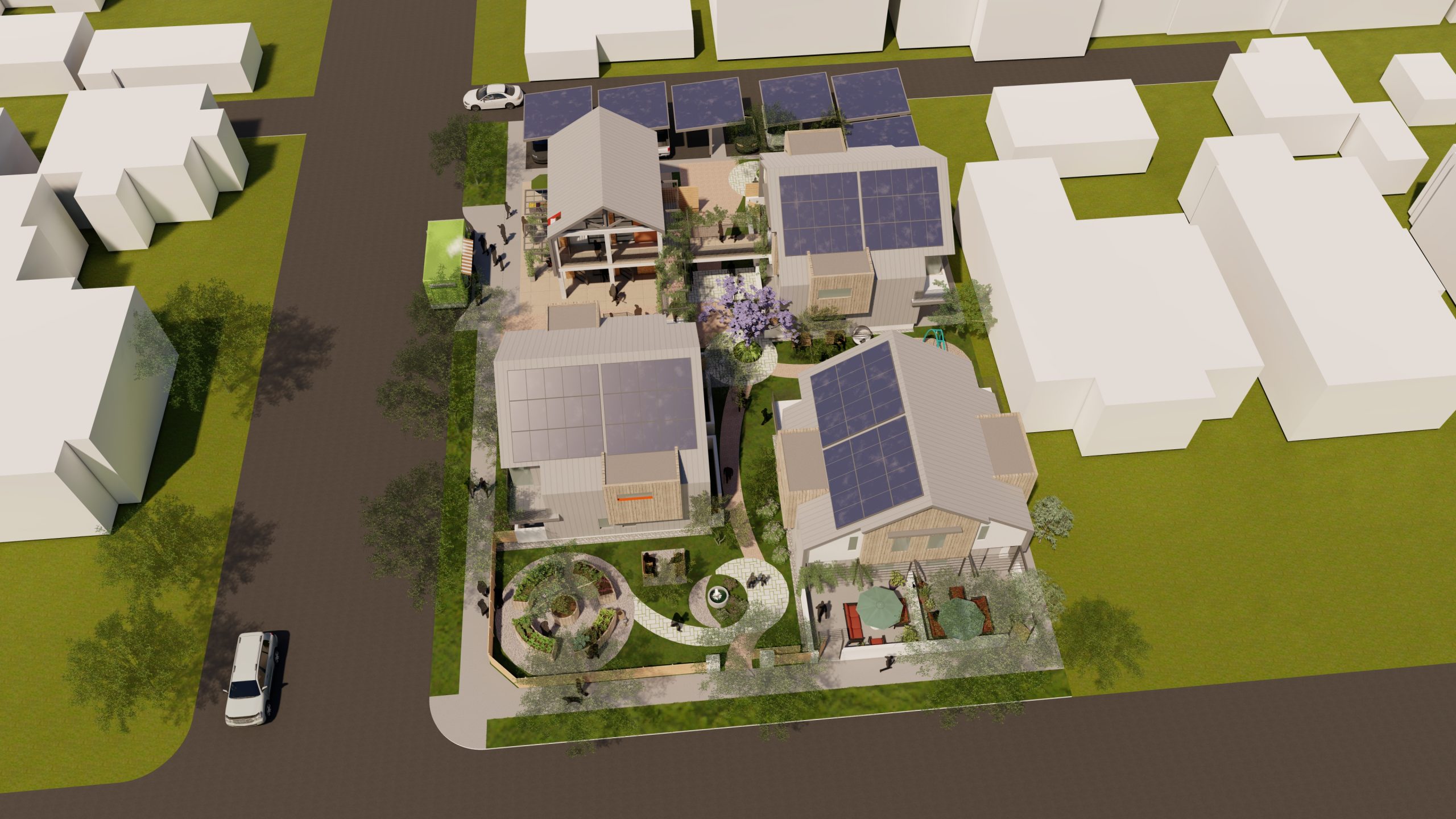 Above Image Shows An iDA Lab Low-Density Redevelopment Concept – 10 Homes On 2 Lots With A Community Room.

We, the residential development community at large, are entering an unprecedented season of public/private partnership with an unassailably noble goal of housing everybody in our beloved and beleaguered California. Forces of supply, demand, and policy are aligning at a moment in history when it could not be more sorely needed. At the center of this perfect storm? RHNA, the Regional Housing Needs Assessment.

The Regional Housing Needs Assessment is a tool used by the California State Department of Housing and Community Development to establish the quantity of additional housing units presumed to be needed throughout the state using the criteria of population, jobs base, transportation, and other factors. Numbers are established on a regional basis, and the local Council of Governments (COG) assigns a share to each city within the region. Cities respond by updating their Housing Element, a component of the city’s General Plan that demonstrates how sufficient potential building sites are available in the jurisdiction and zoned to accommodate the designated allotment of new homes, at a range of affordability levels. The current assessment, coming in the midst of an intractable housing crisis, allots a very high proportion of the total number to units affordable to extremely low- and very low-income households.

A housing element is updated about every 8 years. From the previous cycle to the current, the leap in required allotments was substantial for most municipalities, and many are reeling from the load they are being requested to carry. To put that into perspective, the updated RHNA number for SOUTHERN California is 1,342,827 new dwellings spread over 191 cities. On a practical level, it is necessary to produce 180,000 units annually in California to keep up with demand; since the financial crisis, the pace has been about 100,000 per year, so supply continues to fall behind. It would take nearly 170,000 unit deliveries per year over the cycle period to produce the assigned number.

Nearly 50 cities in the region have appealed to the State to challenge their allotments; almost all have been denied. In the previous RHNA cycle, only a tiny percentage of municipalities delivered on their numbers, and it is generally observed there was no real penalty for missing them. In the current cycle, that has changed; cities now face consequences from the State if they fail to produce, by the deadline in October, an updated Housing Element certifiable by the HCD. These consequences can include the changing of the City’s RHNA cycle from 8 years to 4, which would impose a horrendous workload on the Planning Department, or the imposition of moratoria on the issuing of ANY building permits, or even the mandated approval of proposed housing developments. In other words, California State law has grown teeth.

Demand for housing continually increases in California, even in spite of the State’s much-lamented recent net out-migration of households. It is difficult to ignore the underlying fundamentals of supply and demand, and the more than 40% of existing households who are “housing stressed,” devoting more than 35% of their monthly household income to cover their housing costs. These households comprise the majority of those leaving the state in search of more affordable living situations. Thus, the RHNA numbers emphasize the production of housing that will encourage more of these folks to stay.

As the demand for housing, particularly affordable housing grows continually, available land for housing development, of course, is decreasing. This imbalance sets up a fundamental tension for most cities, particularly those who already feel they are “built out.” In the City where I work, the RHNA requirement would demand enough dwelling units to accommodate over 20% of the existing population based on the City’s average household size. That is a major load, by anyone’s estimation. Of those, nearly half are earmarked to be affordable to households earning between 0 – 80% AMI.

Many Cities are holding public workshops to consider plausible alternative approaches to possibly reach these intimidating numbers. Unless a City happens to be surrounded by vast tracts of open land that are not already dedicated to public open space, and therefore inviolable, the search for developable parcels to hit the allotted numbers will be a scrappy affair. Thankfully, with the State’s new ADU law, there’s a resource hiding in plain sight, which is existing backyards of single family dwellings. That’s a start, and it’s a bonus that most accessory dwelling units, or “granny flats” tend to be more affordable than an apartment in a managed community with amenities. If there is any undeveloped land large enough to support a neighborhood of single family detached housing, then to improve it with a design that incorporates both an ADU and perhaps a Junior ADU on each lot would yield more than double the density for that neighborhood that one might normally expect from SFD tracts.

But ADUs, great as they are, will ultimately represent only the tiniest little trickle of production. It is obviously necessary to scout locations for multifamily projects at varying ranges of density, and that’s really where the rub is, as those properties are in extremely short supply; that is, at least under the current zoning. The State has recognized that developments up to 30 dwelling units per acre are considered affordable and can count toward the designated total. At a recent City Housing Element update workshop, I posed a question about the need for re-zoning and up-zoning of entire swaths of the City, particularly large lots, in order to reach the RHNA numbers. The response was quite encouraging; it was agreed that yes, in order to have a prayer at identifying sufficient sites with adequate capacity for new housing, it would be necessary to amend underlying zoning, either by overlay, such as a Conditional Use Permit (CUP), or by outright zone changes. If new zoning is proposed, it would also require an update of the City’s General Plan, so the assumptions made in the Housing Element could legally be supported and encouraged by City policy. It was evident the City was seeking help from its citizens to identify such potential sites, as they indicated that if a participant owned land that needed a re-zone, and they were considering housing, they should approach the planning staff with a proposal, which would be given serious consideration.

How awesome is that? I know the behavior of brokers and land acquisition people seeking to find deals; they drive by an underutilized site, in a good location, and wonder “Huh; could we make this work?” I believe the position of the City on this is that they will take any reasonably plausible lead that can be brought to their attention. When it is necessary to conjure 20,000+ new dwellings, no reasonable offer will be refused for consideration. Of course, there will still be an entitlement process required to make it possible, but we’re veterans of that process and used to it.

I deeply and sincerely hope this process will usher in a new season of profound cooperation between the Cities and the private developers who will actually produce the dwellings. Remember the City only has to identify the potential sites; they are still almost entirely dependent on the development community to deliver the new homes. In a sense, almost anyone can be a developer at some level, and all are needed—from the typical empty nester, high equity homeowner seeking to increase the value of their investment with an ADU to the large institutional organizations with the clout to produce hundreds of units at a time.

So keep your eyes open for awesome opportunities that didn’t exist yesterday! Working together we can accomplish the impossible.